Every plumbing fixture has a trap. The purpose of a trap is to prevent foul-smelling sewer gas from coming back into the house.  The diagram at right shows a P-trap, which can be found at sinks, showers, and bathtubs.   The left side of the trap connects to the plumbing fixture, and the right side connects to the sewer.  The ‘sewer’ side will have sewer gases present, but the water sitting in the bottom of the trap prevents the sewer gases from entering into the house.

Floor drains are no exception. The photo at right shows a floor drain, as viewed from the side.  The shaded portion shows the trap where water will always sit, which prevents sewer gas from coming in.  When you look at an installed floor drain, all that you typically see is the grill on top; the rest of the drain is always buried in the basement floor.

When the drain line gets clogged If the drain line for the floor drain gets clogged, it needs to be cleaned out with a drain cleaning tool. The floor drain has an area which bypasses the trap, which will allow a tool to be inserted into the drain.  I’ve highlighted this bypass in the photo below, left.   Normally a plug is installed here because this is an area where sewer gases dwell.  When the plug is removed, sewer gases come into the house.  After the drain gets cleaned out, the cleanout plug needs to be replaced.   The plug is circled in blue in the photo below, right.

What if the threads are destroyed? On some older floor drains, the threads that used to accept the cleanout plug are damaged or badly rusted, to the point that it’s impossible to screw in the cleanout plug.  The only acceptable repair for this situation is to install a rubber plug.  One type of plug is a piece of rubber that is sandwiched between two pieces of metal that expand the rubber when tightened together.  The two photos below show a rubber plug before it’s tightened and after it’s tightened.  Another type of rubber plug can be found at Real-Tite Plugs – a company located in Golden Valley.

A missing cleanout plug usually means one of two things:

Just for fun, here are a few photos of missing cleanout plugs that I’ve taken within the past couple of months. 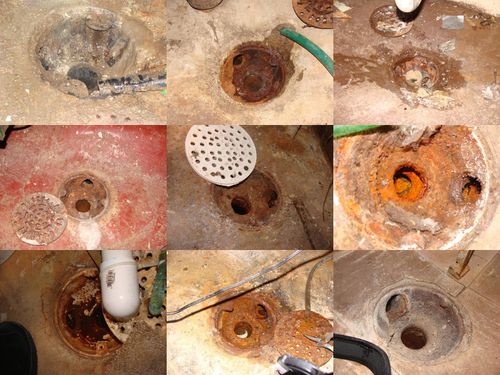 For more information on common Truth In Sale of Housing defects, click on any of the links below.