Home inspectors might find more hack repairs when it comes to plumbing projects than anything else – mostly because it’s easy to  do a plumbing project wrong, but still have the drains work.   Sort of. 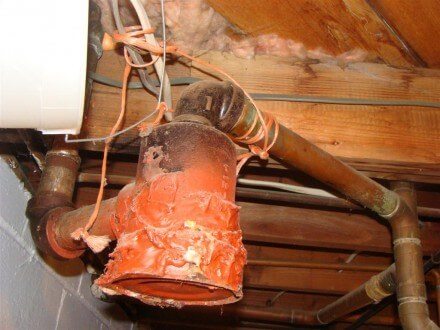 I have about a million photos of hack plumbing repairs, but that’s not the point of this post.  Today I’m going to give a list of some common plumbing products sold at home improvement stores and hardware stores in Minnesota that probably shouldn’t be purchased.  Whatever you plan to do with these products is most likely going to be a violation of the Minnesota State Plumbing Code.

First and foremost comes my favorite; the drain tube meant for an S-trap or washing machine drain.  I love the photo below because the packaging encourages you to be your own plumber… which is exactly what the ambitious-looking square on the cover has decided to be, unfortunately.  He’s installing an S-trap, which is illegal in Minnesota (4715.0960), and as far as I know, everywhere else in the country.  While the packaging also says that this 1-1/2″ drain tube can be used for a washing machine drain, the minimum size allowed for a washing machine drain, also known as a standpipe, is 2″ (4715.2300).

S-traps are usually found at sinks, and are often accompanied by several other plumbing defects. 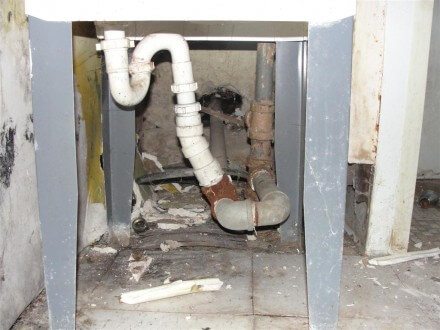 There is no simple solution to an “S” trap, but they’re usually not a major problem.

Another illegal plumbing trap is any type that relies on concealed partitions to create a trap – such as a bottle trap (4715.0960).  They come in several varieties. 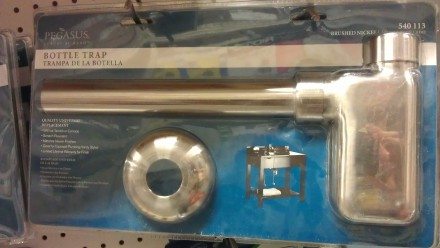 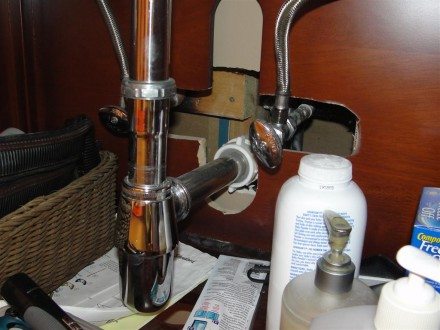 The proper and prudent product to purchase in these particular cases is a P-trap.

Corrugated drains have to be one of the most common ‘handyman’ plumbing repairs that home inspectors find. 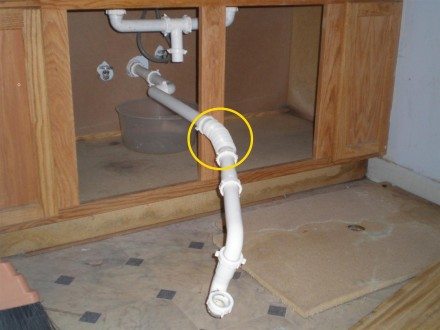 “F. The drainage system shall be designed, constructed, and maintained to conduct the waste water with velocities which will prevent fouling, deposition of solids, and clogging.”  (4715.0200)

All of those little corrugations allow for fouling, deposition of solids, and clogging.  When changes in direction need to happen, it should be done with proper fittings that have smooth interiors.

Saddle valves are usually used for whole house humidifiers, which I’m not a fan of to start with, and ice-makers.  They work by piercing a hole in your water pipe, and they’re prone to leaking.  They’re also not allowed in Minnesota.

Instead of using a saddle valve, have a proper valve installed.

Toilet fill valves that sit in the bottom of your toilet tank are often referred to as ‘clamshell’ fill valves, and they’re not allowed in Minnesota, because they create a potential cross-connection between the water in the toilet tank and the potable water supply. Don’t put these in.  See 4715.2150 – flush tanks. 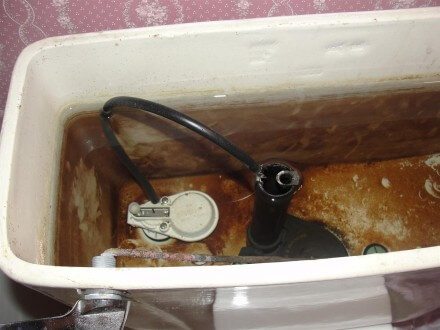 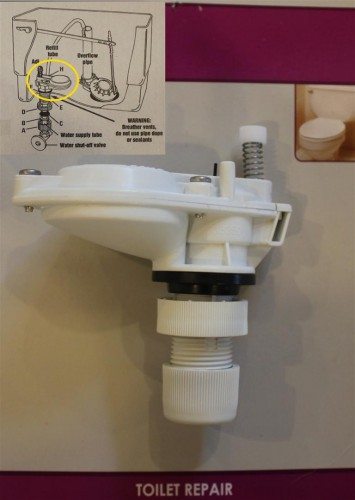 Toilet fill valves need to be of the anti-siphon type, which means they will have something called a “critical level”.  This “critical level” line needs to be at least 1″ above the top of the overflow tube in the toilet tank.  One of the more common types of fill valves are the ones made by Fluidmaster.  The diagram below comes from their installation instructions, and it shows what a fill valve should look like. 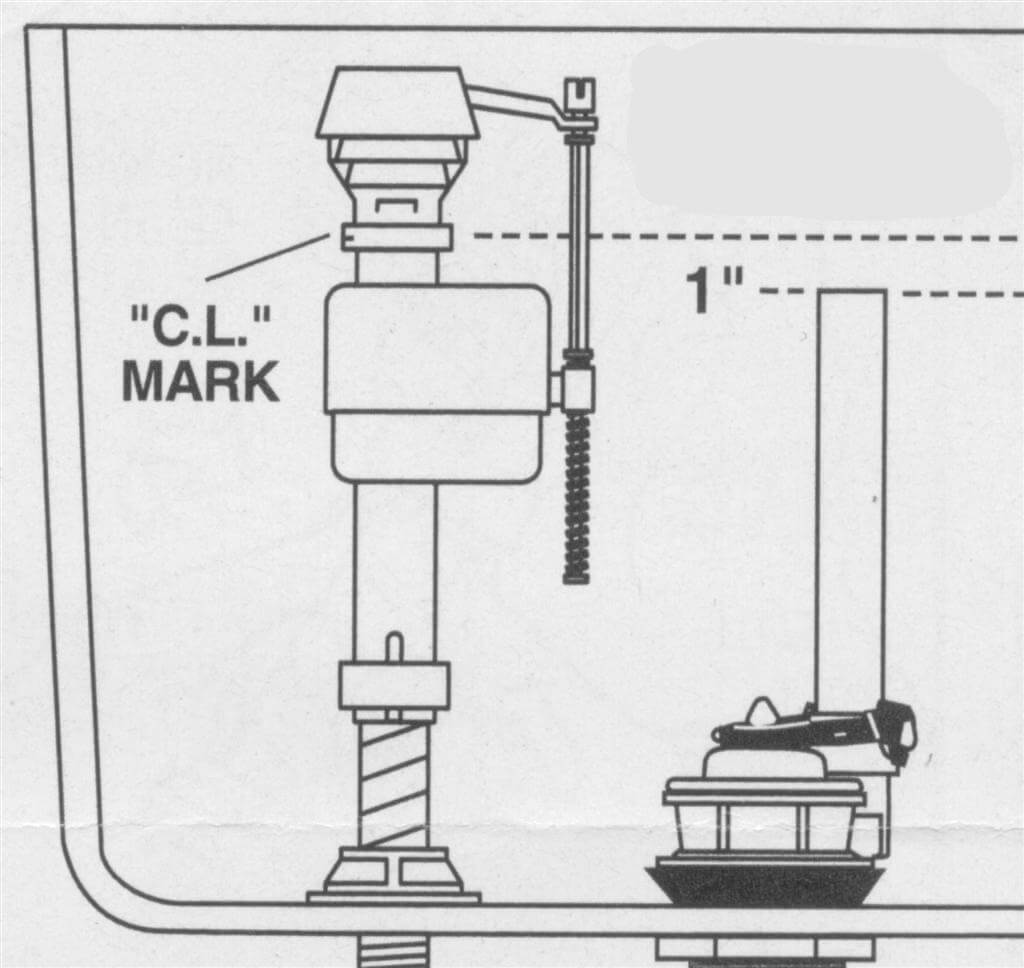 Instead of buying a ‘clamshell’ style fill valve, get the adjustable 400A valve made by Fluidmaster.  These are sold everywhere.

Rubber fittings used on drains or vents like the one shown below can sag or collapse.  They’re always a no-no. 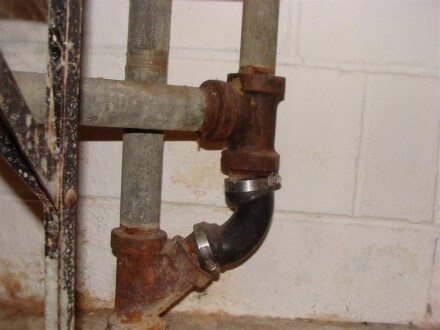 If you can’t figure out how to make your drains work without the use of rubber fittings, call a plumber.

The one exception to this for above-ground drain and vent piping is a rubber coupler with a stainless steel metal band or sleave surrounding it.  The stainless steel band gives it rigidity, which prevents what’s happening to the un-banded connector in the photo below. 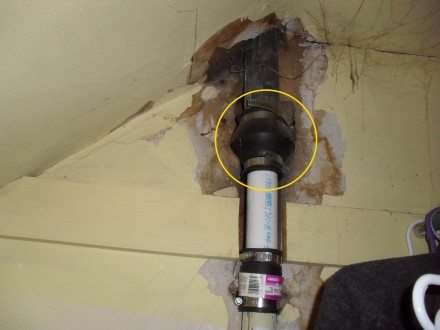 These un-banded couplers are sometimes allowed or even required on high-efficiency furnace vents, and they’re allowed to be installed on their side when buried in dirt, but the other 99% of the ones you’ll see are wrong.  The photo below shows a proper steel-banded connector.  Check out the fine print that says “2” CI, PL, or ST to 2″ CI, PL, or ST”.  This tells you the different materials that this connector is designed for.  These types of connectors are usually the right ones to buy. 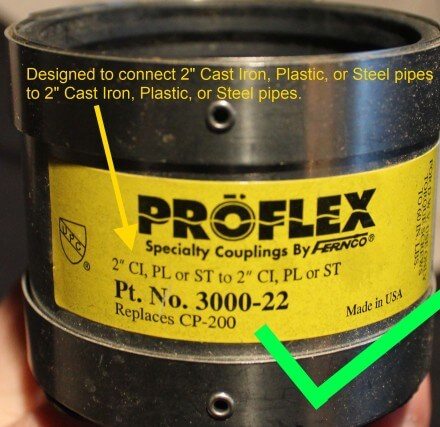 Slang terms: Note the brand on the coupler shown above – “Fernco”.  When you hear people refer to “Fernco” couplings, they’re usually referring to couplings without metal bands, but Fernco obviously makes both.  When you hear people mention “Mission” couplings, they’re usually referring to banded couplings… but Mission makes both as well.  For quick proof of this, do a google image search for “mission coupling“, and do another for “fernco coupling“.

Flexible connectors aren’t allowed at water heaters or water softeners in Minnesota.  I’ve heard that these are actually a good thing to use in parts of the country that are subject to earthquakes, but not here.  The state plumbing code doesn’t allow these flexible connectors, because they reduce the water pipe diameter – the minimum allowable pipe diameter is 3/4″.  I know of one manufacturer that offers a connector with a .72″ inside diameter, but they’re still not allowed in Minnesota. 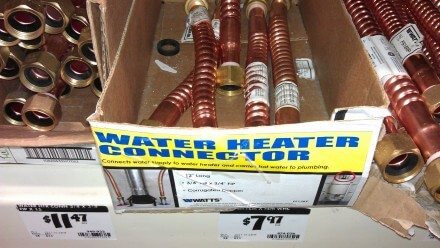 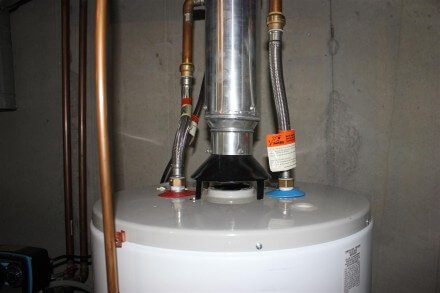 I have these connectors installed at my own water heater because that’s what was there when I bought my house.  I could personally care less if they’re there or not, because I’ve never noticed any difference in water flow at homes that have these… but they’re still a plumbing code violation in Minnesota.

If you have a Truth-In-Sale of Housing Evaluation performed at your home in Minneapolis and the water heater is less than three years old, these flexible connectors would be a required repair item.

Mechanical vents are not allowed in Minnesota.  These are often referred to as cheater vents, and they come in two varieties – an air admittance valve and a check vent.  A discussion of the different types is a moot point for Minnesota, because neither is allowed.  If you’re curious though, check out this post by Seattle Home Inspector Charles Buell on check vents vs. air admittance valves.

The photo below shows a check valve installed on a lav vent inside a cabinet.  On a proper installation, the vent would have been run inside the wall, connected to other vents for the bathroom, and eventually terminated above the roof. 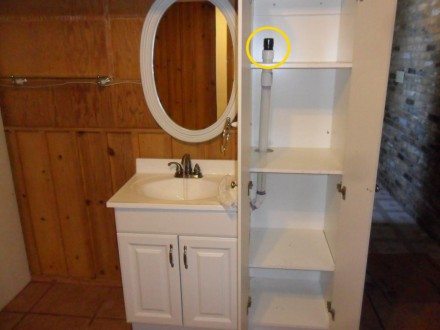 The purpose of a mechanical vent is to allow drains to suck air without admitting sewer gas in to the home.  I’ve heard that air admittance valves actually work quite well, but they’re still a code violation here in Minnesota.

Just because they sell it doesn’t mean it’s legal.  I often hear homeowners say “If these things aren’t allowed in Minnesota, why’d the guy at the store sell it to me?”  The answer is usually that they didn’t know any better.  You shouldn’t expect the person working in the plumbing department at a home improvement store to be up-to-date on the latest plumbing codes.  Plumbers need a lot of training and experience – that’s why they charge what they do.